Twins are no doubt the most fun thing that can ever happen to you. First of all they are twice the blessing and joy from our Lord if you get to have them for kids. Sure, it’s twice the noise and twice the mess but that’s all part of the package since they also give you twice the love. And if you get to have them for friends, then that’s two times the happiness. Of course there will be total chaos from the confusion that comes if they are completely identical, but then again, that is just why they are awesome to be with. 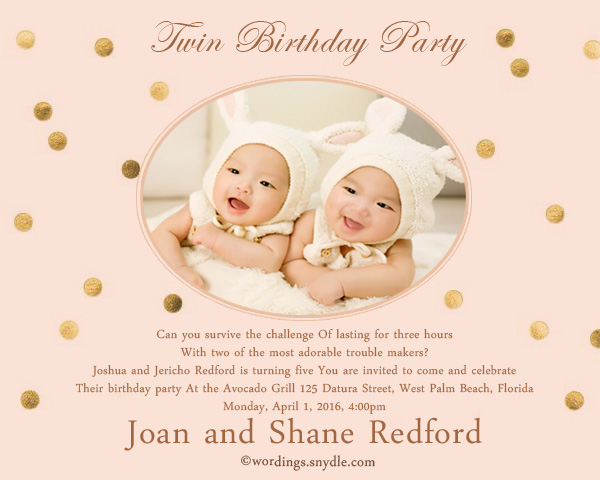 Can you survive the challenge
Of lasting for three hours
With two of the most adorable trouble makers?
Joshua and Jericho Redford is turning five
You are invited to come and celebrate
Their birthday party
At the Avocado Grill
125 Datura Street, West Palm Beach, Florida
Monday, April 1, 2016, 4:00pm
Joan and Shane Redford

Have you ever been in a room
Where laughter just explodes every after 5 seconds?
If not then try playing with our princesses
Kathleen and Kathrine King
Celebrate their 5th Birthday party
At Lulu’s Bakery and Café
918 N Main Avenue, San Antonio, Texas
Tuesday, April 2, 2016, 4:00pm
Lei and Lou King 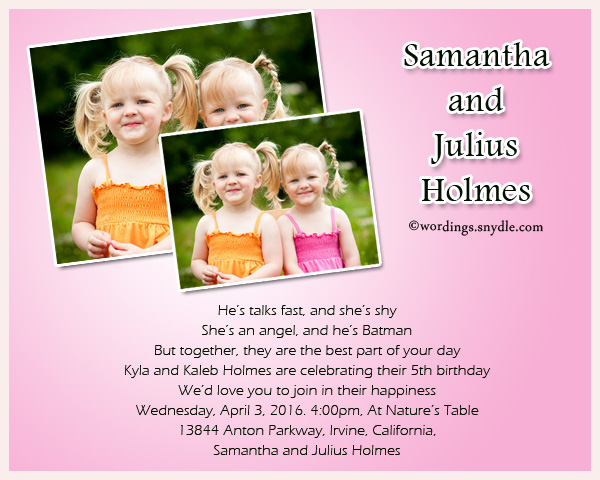 He’s talks fast, and she’s shy
She’s an angel, and he’s Batman
But together, they are the best part of your day
Kyla and Kaleb Holmes are celebrating their 5th birthday
We’d love you to join in their happiness
Wednesday, April 3, 2016. 4:00pm
At Nature’s Table
13844 Anton Parkway, Irvine, California
Samantha and Julius Holmes

They have been nothing but magical
In all these years and they are just getting started
Join Wallace and Willow Hastings
On their 15th Birthday party
And keep the magic going
Thursday, April 4, 2016, 4:00pm
At Hard Rock Café
1 E, 161st Street, Bronx, New York
Mary and Julian Hastings 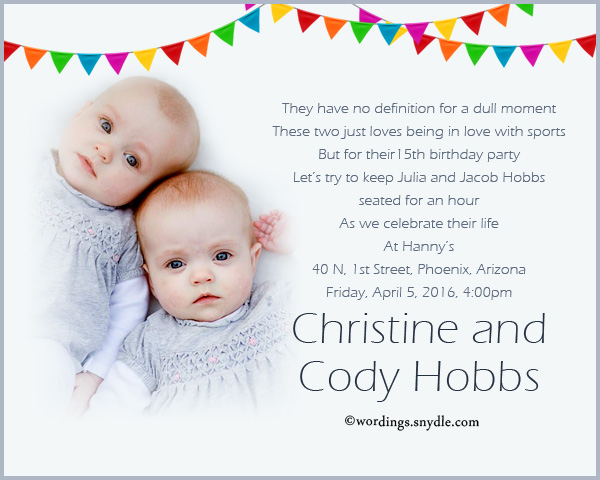 They have no definition for a dull moment
These two just loves being in love with sports
But for their15th birthday party
Let’s try to keep Julia and Jacob Hobbs seated for an hour
As we celebrate their life
At Hanny’s
40 N, 1st Street, Phoenix, Arizona
Friday, April 5, 2016, 4:00pm
Christine and Cody Hobbs

They both like to think
They live the life of future race car drivers
That dream may well come true in the future
But for now join us in celebrating
Jamaal and Justin Lake’s 15th Birthday party
Saturday, April 6, 2016, 4:00pm
At Mancini’s Char House
531 7th Street, W Saint Paul, Minnesota
Athena and Kristoff Lake 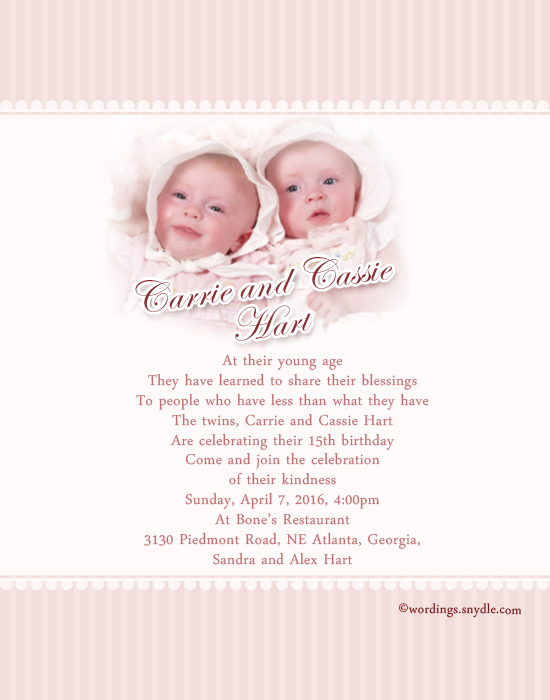 At their young age
They have learned to share their blessings
To people who have less than what they have
The twins, Carrie and Cassie Hart
Are celebrating their 15th birthday
Come and join the celebration of their kindness
Sunday, April 7, 2016, 4:00pm
At Bone’s Restaurant
3130 Piedmont Road, NE Atlanta, Georgia
Sandra and Alex Hart

They been total goofballs and pranksters
Since the day we met them
And they have no plans of a change of heart
Even on their 21st birthday party
Join Jon and Jay Creed
For a day of mild mischief
Monday, April 8, 2016, 5:00pm
At Lee’s Famous Recipe Chicken
3638 Round Bathon Road, Cincinnati, Ohio
Lisa Hunter 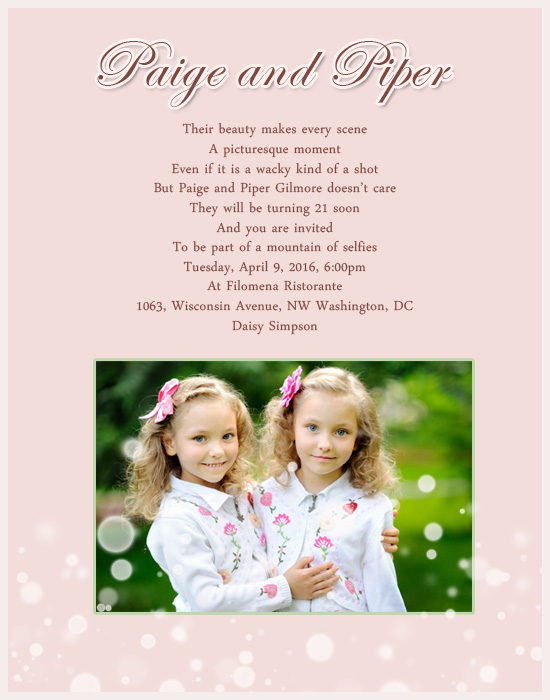 Their beauty makes every scene
A picturesque moment
Even if it is a wacky kind of a shot
But Paige and Piper Gilmore doesn’t care
They will be turning 21 soon
And you are invited
To be part of a mountain of selfies
Tuesday, April 9, 2016, 6:00pm
At Filomena Ristorante
1063, Wisconsin Avenue, NW Washington, DC
Daisy Simpson

These two are inseparable
Even when they go to places
As lovely as their souls
Michael and Michelle Links
Are having their 21st birthday party
Come and join the celebration
Wednesday, April 10, 2016, 7:00pm
At Tasty and Alder
580 SW, 12th Avenue, Portland, Oregon
Bunny Peterson